For God so loved the world, that he gave his only begotten Son, that whosoever believeth in him should not perish, but have everlasting life. For God sent not his Son into the world to condemn the world; but that the world through him might be saved. John 3:16, 17

Please note:  originally published on this blog 3/29/12.
I attended the funeral for a childhood friend that the Lord called home unexpectedly, and grieved for her family and friends who were closest to her.  I am thankful that my friend had put her trust in Jesus and her family could take comfort that she is indeed in heaven, reunited with her mother, and those who had gone on before her.

These two verses above, John 3:16, 17 were her favorite passage from the Bible.  My husband had the privilege of speaking at her funeral.   He conveyed so well the message I want to share, that I’m going to use his words below. 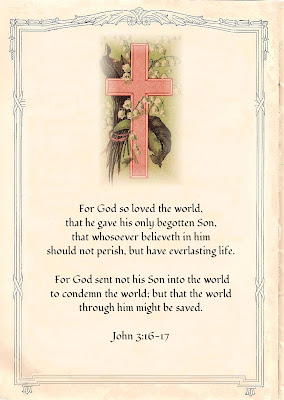 From these verses, one can plainly understand that getting to heaven is based on a belief not a life style.  God judges us by what’s in our hearts and only he knows what we truly believe.  Being a Christian is not based on your behavior, but a faith based belief in Jesus Christ as your Savior.

Being a Christian contrary to popular belief, is not living a sin free life, but trusting in someone more perfect than ourselves to do for us what we are not capable of doing.  Having a belief not only that Jesus existed, but a belief that he was who he claimed to be, and a belief that he paid the penalty for your sins past, present and future.

The Bible tells in 2nd Corinthians, to be absent from the body is to be present with the Lord.  All we see in this world is temporal including ourselves; the invisible or spiritual world that we don’t see is eternal.  The life force inside our body or in other words our spirit, departs the confines of a mortal body, and passes into the immortal spirit realm at death, to be with God.

God tells us in His word, death is not the end, but the beginning of a life that goes on forever.  This is the hope Christians cling to, that when this life is over there is something eternally wonderful waiting for us on the other side of mortality.

In Ecclesiastes 12:7 we read, The dust returns to the earth as it was: and the spirit shall return to God who gave it.   I have always liked C.S. Lewis’s concluding words about Heaven in the chronicles of Narnia, he wrote:

Now at last they were beginning Chapter One of the Great Story no one on earth has ever read, which goes on forever: in which every chapter is better than the one before. C.S. Lewis

Thank you dear ones for reading, following this blog, commenting and sharing. You are prayed for and appreciated.

Posted by Little Birdie Blessings at 7:46 AM