And the angel said unto them, Fear not:
for, behold, I bring you good tidings of great joy,
which shall be to all people.
For unto you is born this day in the city of David
a Saviour, which is Christ the Lord.
Luke 2:10-11 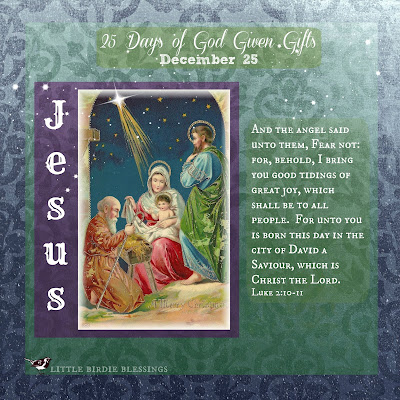 Merry Christmas! ONE SOLITARY LIFE describes the life of Jesus well. It's author unknown, the words filled with biblical wisdom. I am sharing it with you this Christmas day, 2018. May you be as in awe of the words describing Jesus, as I am. Merry Christmas dear ones. 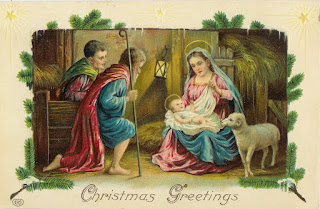 One Solitary Life ~ author unknown
Nearly two thousand years ago in an obscure village,
A child was born of a peasant woman
He grew up in another village where He worked as a carpenter until the age of thirty.
Then for three years He became an itinerant preacher.
This man never went to college or seminary
He never wrote a book
He never held a public office
He never had a family nor owned a home
He never put His foot inside a big city
Nor traveled even 200 miles from His birthplace.
And though He never did any of the things that usually accompany greatness,
Throngs of people followed Him. He had no credentials but Himself.

While He was still young, the tide of public opinion turned against Him.
His followers ran away
He was turned over to His enemies and went through the mockery of a trial.
He was sentenced to death on a cross between two thieves
While He was dying, His executioners gambled for the only piece of property He had on earth – the simple coat He had worn.
His body was laid in a borrowed grave provided by a compassionate friend
But three days later this Man arose from the dead
Living proof that He was, as He had claimed, the Savior whom God had sent,
The Incarnate Son of God.

Twenty centuries have come and gone and today the risen Lord Jesus Christ is the central figure of the human race.
On our calendars His birth divides history into two eras.
One day of every week is set aside in remembrance of Him.
Our two most important holidays celebrate His birth and resurrection

On church steeples around the world, His cross has become the symbol of victory over sin and death.
This one Man’s life has furnished the theme for more songs, books, poems and paintings than any other person or event in history.
Thousands of colleges, hospitals, orphanages and other institutions have been founded in honor of the One who gave His life for us.


Two FREE printables that go with this series. You can find download links here:
http://bit.ly/FREEadventgraphics

These images are free for personal use, ministry use, or for gifting. Not to be sold. If you share the images on your blog, a link back would be appreciated. Please do not copy my entire posts to your blog. Thank you.

I will be posting this until Christmas here on my blog. You can follow this series your favorite way.
Links are below: